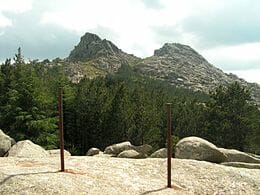 Parco del Limbara is a beautiful natural park in north-east Sardinia. An absolute wonder, the Limbara Park is home to the massif of Mount Limbara with its highest peak, that of Punta Sa Berritta at 1362 metres. The area’s unusual geological formation features high pinnacles and granite rocks polished by nature’s elements.

Know that Mount Limbara is an actual mountain and not one of the many hills dotting the Sardinian landscape. Adventurous Forte Village Guests don’t hesitate to make the climb and are rewarded with a glorious view on getting to the top. There are a number of marked trails you can follow, with some starting at the side of the Temple. While the trails are easy to walk through, there’s an alternative winding road for vehicles.

At the top of the mountain, to the north, you’ll see the whole of Gallura as far as the sea, and behind, the outline of Corsica. Looking west, you’ll see the smoke of ships coming to port at Olbia. Southwards, you’ll be facing the Logudoro landscape and if you’re lucky, you’ll see eagles flying past when you look up.

Around Mount Limbara is over 6,000 hectares of forest under state protection. The forest is rich with beautiful flowers such as lavandulas, orchids, cyclamen delicates, broom flowers and peonies roses. The park covers the territories of four municipalities: Berchidda, Calangianus, Oschiri and Tempio. The territory of Berchidda constituting the southern part of the park, has various natural resources, such as Eritti and Su Eritteddu.

The forest features carefully delineated trails for hikers or bikers to take advantage of, such as the one that starts at the Curadoreddu forest station and climbs to the top of the Limbara. There are opportunities to stop for breaks at the Vallicciola forest station and the Sanctuary of the Madonna delle Nevi. At Vallicciola, there are two hotels and many holiday homes, as well as picnic areas and barbecue grills. Or you could take the path that leads to the stazzo Tiu Daniele to explore the caves and grottoes shepherds once used as a shelter for themselves and their flock.

In the southern part of the Limbara, there is a butterfly garden with an educational centre. Between March and October, tourists can admire rare species of butterflies as they feed on nectar and pollinate the plants. There is also the 80-hectare Mediterranean arboretum packed with various species of trees from around the Mediterranean basin. What makes the arboretum even more special is the expertly designed educational trails. In the hamlet of Seritti, relatively close to the arboretum is the native wildlife restoration and reintroduction centre for the native deer, the wild mountain sheep of Sardinia, and mouflon.

How to Get There

From Forte Village Resort, Parco del Limbara is a long drive of three and a half hours via the E25 road but is totally worth it. From the barracks of the Limbara forest, you can move in different directions to explore the park.