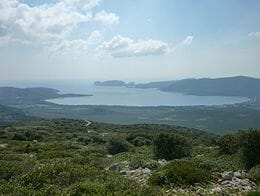 Parco Naturale Regionale di Porto Conte (Di Porto Conte National Park) is one of the most breath-taking corners of the Mediterranean; and another great area of interest for visitors to The Forte Village.

The park was established with the aim of managing the fascinating ecosystem of natural wonders in the north of Alghero. It covers a coastline of 60 kilometres, spanning from Calich to Baliz Lake, and encloses a large body of water. It is a classic advertisement of the unique landscapes in Europe. Currently, the Park’s territories don’t extend the borders of the Municipality of Alghero.

An area of untamed beauty, the Parco Naturale Regionale di Porto Conte is where natural forces have been left untouched for millennia, with naturally carved landscapes and biological balances that are pristine and awe-inspiring.

The park is nearly 100% a work of nature, with human input very minimal. Its unique setting is defined by natural elements such as cliffs, stones and maquis – all of which combine harmoniously to create an ancient beauty.

In the heart of the Parco Naturale Regionale di Porto Conte is a natural reserve that has been named “Arca di Noè” (Noah’s Ark), which is managed by the Sardinian Forestry Commission. It is walled in by the promontory of Capo Caccia and provides a fascinating experience of natural history that trail the Porto Conte State Forest.

Also called “Le Prigionette” (Little Prisons), as it was once a section of penal colony, the “Arca di Noè” spawns an area of 12 kilometres and has been described as a permanent nature reserve.

But it is only a part of an entire area of enchanting beauty that captures the imagination of tourists with its stunning landscapes, and rich concentration of flora and fauna. In the lagoon of the River Calic, for example, you’ll be captivated by a myriad of exotic species of migratory and non-migratory birds, including the Eurasian coot, the Eurasian reed warbler, the water rail, the common moorhen, the mallard, the little grebe, the grey heron, Cetti’s warbler, the egret, and the great cormorant.

And in the cliffs, many rare species of marine birds have built nests and made a large colony, some of them also habitating the caves and ravines, and spaces between the rocky reefs.

Here is the natural habitat of the super-fast peregrine falcon, the yellow-legged gull, and the internationally protected European storm-petrel. It is also not uncommon to occasionally sight the Audouin’s gull, as well as flocks of the wild pigeon, the common raven, the European shag, and the common swift flying across the skies.

Visitors to the nature reserve are required to register at Forestry Commission’s offices, where they can also consult maps and access literature on routes.